In its 20th edition, the Asia TV Forum & Market (ATF) announced its biggest market yet with a five percent growth in market size, compared to 2018.
The expansion included the presence of new brands such as Baidu Haokan, Google Play, GoPlay, Hoichoi, and Jio.
20% of buying professionals were new to ATF in 2019, and 40% more buyers indicated interest to acquire digital rights.
With attendees from 55 countries and regions, the diversity of content and partnership possibilities represented reflected Asia’s rising place in the media and entertainment space, as the industry faces exciting times with several high-profile launches of OTT video platforms and mergers & acquisitions.
With speaking heavyweights revealing visions for the future, the ATF Leaders’ Summit addressed how Asia aligns with the global strategies of new market powers. Industry luminaries delivering keynotes included Giorgio Stock, President of WarnerMedia Entertainment Networks, Distribution and Advertising Sales, EMEA and APAC, Gong Yu, Founder and CEO of iQIYI and Shibasish Sarkar, Group CEO of Reliance Entertainment.
Glamour also descended on ATF 2019 as celebrities from Thailand, Turkey, the UK, Hong Kong, Singapore and Taiwan, present in various capacities. Magician Dynamo, of the eponymous program “Dynamo: Magician Impossible” entertained the ATF crowdat the oficial opening party with an exclusive performance ahead of his new program “Project 7”. Thai superstar James Jirayu also made an appeareancw to discuss a new film.
“The 20th edition of ATF took place during exciting times of a paradigm shift. With so many changes happening ahead, we expect the market to be dynamic this year, and discussions at conferences to be intense and insightful,” noted Yeow Hui Leng, Group Project Director of Reed Exhibition, the producer of ATF

For more information about the show in 2020, please visit
www.asiatvforum.com 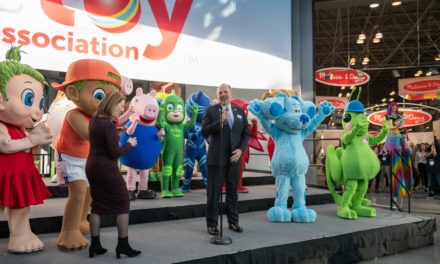 Toy Fair New York: What impact will Coronavirus have on the industry?